by Shawn Browning on October 24, 2017 in Industry News

[UPDATED] A new study commissioned by the Worldwide Independent Network (WIN) looks at the global market share of independent music labels based on copyright, rather than distribution, and reveals a very healthy indie sector on the rise. 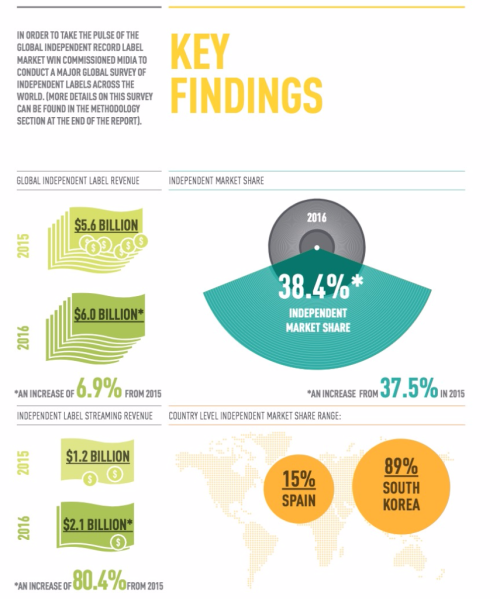 Commissioned by trade group WIN to analyze the global economic and cultural impact of the independent music sector, it was authored by Mark Mulligan of MIDiA Research and edited by Dave Roberts of MBW. The survey was completed by 660 respondents including labels and distributors from 26 countries.

All of this becomes important because market share is used by digital music companies like Apple, Google and Spotify in negotiations with the indie sector and often determines the levels of remuneration paid by these companies to music right holders.

“The WINTEL 2017 report tells the story of another strong year for the independent sector. It has seen solid growth overall and an astonishing increase in streaming revenues. Both are trends we are confident will continue,” says  Alison Wenham, CEO of WIN.

As with the majors, streaming drove indie growth in the global recorded music market. 2016 was the second consecutive year of industry growth (5.9%). Prior to 2015 it had endured 15 years of decline.

“It is truly gratifying to see both U.S. and global independent market share increase again. We must continue to strive for a level playing field where the best releases rise to the top and where the digital services that respect copyright do not suffer unfair competition from those that co-opt our rights, says Richard James Burgess, CEO of A2IM

“Even as we celebrate we must remain vigilant,” Burgess warns. “We are fighting our way out of a deep hole created by copyright abusers and we have a long climb to get revenues for creators and producers back to where they should be.”