There are a ton of articles on using Facebook as a musician, but I think most of them miss the mark in some respect.

This is not why you became an artist, and I know that. You should be spending most of your time making your art, and your social media should be a reflection of your art that serves to create a relationship between you and your fans.

It’s a tool, and you should treat it with care.

Here are my top 14 Facebook marketing tips. I’ve learned these from experience, and they have helped me build a better brand while balancing social media with music-making.

You may have read a few Facebook marketing guides that suggest posting every day. There may have been a time when that was a winning strategy, but today, I disagree.

For artists more than anyone else, posting every day is unnecessary and potentially harmful. The last thing you want is for fans to grow tired of your constant social media presence. There’s only so much interesting content to post – don’t let yourself go stale.

Beyond that, posting every day is a total distraction. You’ll then feel obligated to interact with fans, check on the post, see how it’s doing, etc. This can become a major time-waster.

You are an artist and a musician, not a social media manager. Maintain your focus on music, and the social media will build itself.

Your social media presence should reflect the music, your attitude towards making music, and your brand as an artist. I’m convinced that every aspect of your public persona is an important part of the art you create.

Building a brand is a reflection of every aspect of how you present yourself. The way you dress, the words you say, the vibe of the images you post, right down to the filters you use.

Get creative with it, and take it seriously. I’ve begun taking a bunch of pictures of my band’s creative process using only analog film cameras and disposable cameras. The result is very different from an iPhone picture.  It gives a sense of nostalgia and it gives you a page with a very cohesive look.

As in art, stealing when marketing your music is okay. Find out what makes a brand work, steal whatever inspires you, and then apply it to your brand.

It’s key to think hard about what you’re posting and what makes another artist’s posts work. Simply copying the style and tone won’t do it. You have to look behind the style and tone, and get to what inspired the brand itself.

Is the artist’s brand filled with Polaroids and blurry sepia toned pictures? Consider how that relates to the music they make. Is their music nostalgic? Is the artist inspired by the tones and looks of the 70s?

I have a friend who is in a pop act, and they style their entire image based on what was popular in the 80s. But it’s not kitschy, it’s very well thought out.

They take their pictures on film cameras because it creates a sense of spontaneity. They are fans of 80s fashion, and spend a long time curating and modifying their wardrobe.

It’s not original, but it makes sense and it’s carefully and intelligently planned. 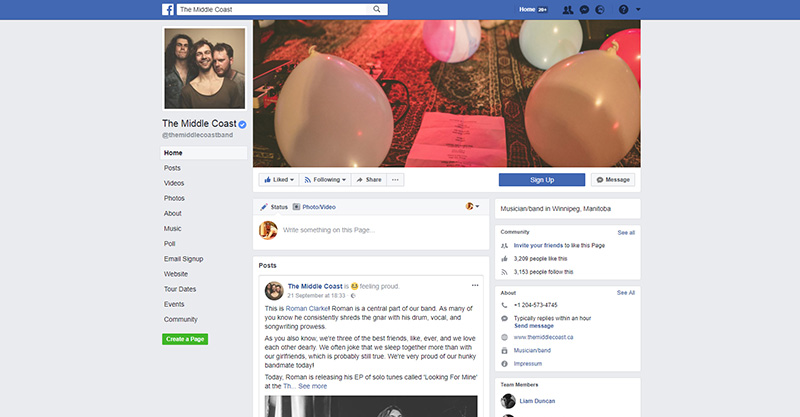 Unless you’re famous (in which case, why are you reading this?) or completely technologically inept, you need to run your own social media.

People can absolutely tell when a manager is running the social media, and it is mostly not a good look.

Social media managers tend to make clunky, generic, and empty posts. How could they possibly convey your personality and style better than you?

Personally, I can even tell when an artist is taking too much social media advice from their management. Most managers are out of touch with what kids are doing on social media, and it totally shows.

Again, you need to carefully look at the profiles of artists that you admire, think about the things that inspire you, think about how you want to appear to the public, and figure it out yourself.

It’s hard to consistently make great content. It helps to have an idea of what your promotion priorities are, which is why a calendar is useful.

If you’ve got a big show coming up, you may want to use most of your posts to promote it.

If you’re releasing a new video, consider how you’ll build excitement for it.

If you’re releasing a whole album, you should carefully think about how you want your pages to look going forward. Take a look at Taylor Swift’s recent releases – she built a huge amount of buzz by pulling all her old social media and releasing a very carefully planned series of hints and images.

Generally, I would aim to post no more than a few times a week. Even that can be a lot. Facebook is so inundated with content, it’s much better to use your limited space well.

A content calendar can help you plan out when the content is released, so that people don’t get tired of it.

Photos used to be the most effective Facebook content. No longer. Anything moving is now the best way to get reach.

In particular, Facebook strongly favors its own built-in video player. Whenever it makes sense, release content using that platform instead of YouTube or any other video player.

If you want to do one better, however, try Facebook Live…

Facebook Live is one of the best features Facebook has added in recent years. It’s super interactive, has a ton of potential for cool content, and on top of that, it has a ton of reach.

Because it is a new feature, Facebook has made its reach much higher than other post types. People will literally get notifications when you go live, which is good for you, because it sends them directly to your page.